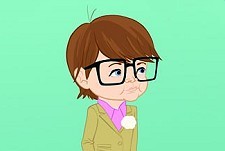 Created by and featuring the voice of Jonah Hill, Allen Gregory is the story of an extremely pretentious 7-year-old about to embark on his greatest challenge yet: leaving the safety of homeschooling and attending elementary school with children his own age.

Allen Gregory received mostly negative reviews from critics. On that basis, it is considered to be one of the worst animated television series to air on television. It was cancelled after onl;y seven episodes.

"Allen Gregory" has not yet received enough votes to be rated. 2.2552
Add Your Vote Now!
Please give the Cartoon Series Allen Gregory a vote between 1 and five stars, with five stars being the best, 1 being a show you absolutely hate, and a three for an average show.
This Series has been viewed 2 times this month, and 2,422 times total.