Synopsis for the Feature Length Animated Film Beauty And The Beast

Beauty And The Beast

Beauty And The Beast

by Dave Koch Post your Comments or Review
This page has been viewed 9247 times this month, and 35762 times total.

In a small French village, the beautiful and intelligent Belle ignores her suitor, the vain and boorish Gaston, as she cares for her father, eccentric inventor Maurice.

On his way to the fair, Maurice stumbles upon a foreboding castle in the woods, and is thrown into a dungeon by the castle's occupant-a huge savage beast. Belle comes to rescue her ailing father, and offers to take his place as the Beast's prisoner. Belle discovers that the castle's house staff has been transformed into objects by the same magic spell that made their master a beast. In order to break the spell, the Beast must learn to love another and be loved in return.

As she remains in the castle, Belle and Beast find their apprehension replaced by affection; but Belle misses her father, and the Beast reluctantly allows her to leave.

Gaston- incensed at Belle's affection for the Beast- leads a mob of townspeople to storm the castle. Belle rushes back in time to confess her love for the Beast, and the spell is broken.

Do you have anything to add to this page? Have we made any mistakes... or do you have any additional information about Beauty And The Beast? If so, we would love to hear from you. Please send us a quick note with your additions or corrections to this page, and we will make the corrections as soon as possible!

Below are comments about this cartoon submitted by people who have seen this show. Take a look and see what others have said about Beauty And The Beast. We want to know what you think, too!! Feel free to share your own opinion- we do want to hear from you! You can add your own comments here.

Comments By: damfine
This is probably the cream of the crop for the Disney studio. They'll never make anything this good ever again.
8 of 54 people found this comment useful

Comments By: tonton
AWESOME!!! Beauty and the Beast is the best when it comes to story, characters, music, animations, visual effects,..etc. The film didn't look like a 1991 film. The animation was great and camera movements and computer generated backgrounds were...  (read more)
7 of 56 people found this comment useful

Comments By: LilKearnsie
One of many movies I am very juch in love with. I'm a sucker for a good love story. (tell no one) Comes second only to Mulan--MY favourite movie of all time!
2 of 67 people found this comment useful

Comments By: Skullfarmer
BEAUTY AND THE BEAST is one of the greatest films ever made. It is visually astonishing as well as emotionally complex,a story of love triumphant over ignorance,hopelessness,transcending even death. The characters are immortal and this movie is a testament...  (read more)
3 of 47 people found this comment useful 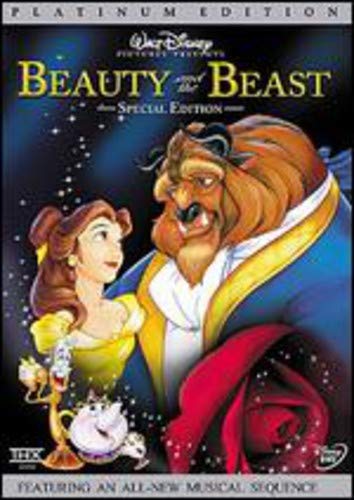