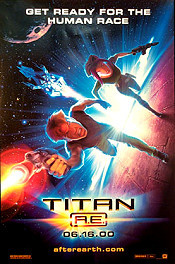 by Dave Koch Post your Comments or Review
This page has been viewed 2082 times this month, and 11349 times total.

The year is 3028. Mankind has conquered space, and even though it was routine to travel to the farthest galaxies, humans always thought that Earth would be home. However, with mankind's new freedom comes new enemies, forcing Earth to prepare for an attack by the Drej, a vicious alien race. In little more than an instant, Earth is gone. The human race barely escapes with its greatest treasure, a magnificent ship christened the Titan.

Do you have anything to add to this page? Have we made any mistakes... or do you have any additional information about Titan A.E.? If so, we would love to hear from you. Please send us a quick note with your additions or corrections to this page, and we will make the corrections as soon as possible!

Below are comments about this cartoon submitted by people who have seen this show. Take a look and see what others have said about Titan A.E.. We want to know what you think, too!! Feel free to share your own opinion- we do want to hear from you! You can add your own comments here.

Comments By: Toontastic
Titan A.E. is unlike any other animated film I've seen to date. With an unfortunate story line weighing it down, I still have to give it major props for having stunning effects, both 2D and 3D. Great chase scenes and gun battles. Never quite understood...  (read more)
0 of 14 people found this comment useful

Comments By: toonwizz
Stunning visual effects highlight this animated film. Definitly brought the art of animation up a notch. So-so plotline and unmemorable characters hurt this film drastically. To many gaps and unanswered questions. Geared towards an older audience , an...  (read more)
2 of 23 people found this comment useful

Comments By: James Anatidae
Titan A.E. is great idea that very nearly worked. It was made as an animated film that wasn't for little kids. The aim is mainly at the 12-year-old to young teenager crowd. To do this, it has many action-flick elements, like fast chases, loud gun battles,...  (read more)
4 of 25 people found this comment useful 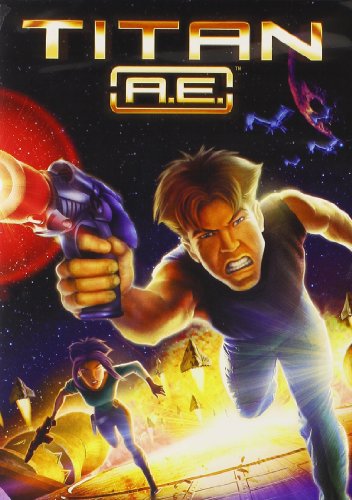