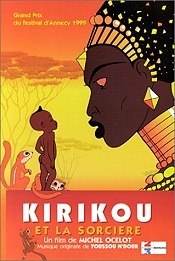 English Title: Kirikou And The Sorceress

Post your Comments or Review
This page has been viewed 1756 times this month, and 6132 times total.

A small voice makes itself heard in the stomach of a pregnant woman:

"Mother, give birth to me!"

"A child who speaks in its mother's stomach gives birth to itself all alone," responds the mother. A little fellow thus comes to the world, cuts the cord, and declares: "I am called Kirikou."

And he washes all alone, then learns that he must not waste water, for Karaba the sorceress has drained the source.

He learns likewise that he no longer has a father nor uncles, for Karaba the sorceress has devoured them.

Karaba is a beautiful, cruel woman, surrounded by submissive and fearsome mascots. Kirikou asks his entourage, in vain, why Karaba is mean.

Thanks to his aplomb and shrewdness, little Kirikou saves the sole man who stays, but he sees all the jewels of his village's women delivered to the angered witch. He saves the village's children from a dugout, an antelope and an enthralling tree. He dares to introduce himself in the conduit of the Cursed Source, discovers a water-drinking monster, kills it, then drowns in the water which has come back. His mother's care brings him back to life.

Thanks to his courage, Kirikou cheats the vigilance of the witch's mascots and reaches the sage of the Forbidden Mountain, his grandfather, who reveals the secret of Karaba's maliciousness...

Then little Kirikou decides to deliver his grandfather from the curse which imprisons him, frustrating the supervision of which the sage is the object, for Karaba wants to relieve herself from this little fellow who's really too curious...

But Kirikou's determination and ingenuity will be justified in all the traps set out for him. And little Kirikou's tenacity will return peace and joy of living to the village.

Do you have anything to add to this page? Have we made any mistakes... or do you have any additional information about Kirikou Et La Sorciere? If so, we would love to hear from you. Please send us a quick note with your additions or corrections to this page, and we will make the corrections as soon as possible!

Do you love Kirikou Et La Sorciere, or do you think it is the worst cartoon ever? Let us know what you think! Surely you have an opinion... so share what you think. Take a minute and post your own comments about this cartoon here. 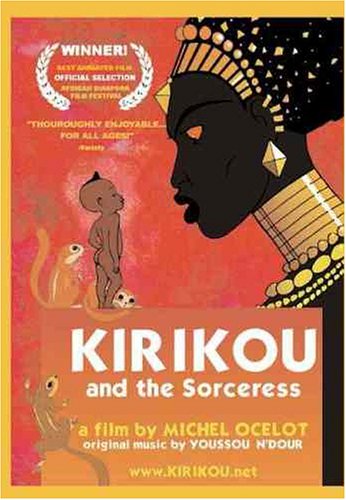