Synopsis for the Theatrical Cartoon Adventures Of Popeye

Post your Comments or Review
This page has been viewed 1624 times this month, and 5979 times total.

Popeye comes to life from the pages of a comic book and shows scenes from "I Eats My Spinach," "Wild Elephinks," "Axe Me Another" and "Popeye The Sailor" with new soundtracks.

This is a slightly longer Popeye entry by Dave Fleischer as he opens with a live-action sequence of a little boy buying a comic book of Popeye the Sailor. A local bully picks on the kid (who's in a girlie dress), and Popeye leaps to life from the cover of the magazine and shows the little kid scenes from some of his adventures. The first episode is the bull-fighting scene at a rodeo where Popeye must extricate himself from a scissor-lock hold by the bull. The next clip is the one where Bluto ties Olive to the railroad tracks and Popeye must take his spinach to demolish the train before it gets to Olive (she's flat enough already!). Then a hilariously politicall incorrect scene from "Wild Elephinks" as Popeye must take on all the jungle animals turning them into a variety of coats, stoles, handbags and other remnants! Finally, the log-rolling fight down the rapids between Popeye and Bluto concludes the retrospect as Popeye encourages the kid to eat his spinach, which the little boy does, and he knocks the bully for a loop. In the final scene, the boy chomps at a hilariously outsized can of spinach and sends the bully over the nearest roof with one punch. Modern parents in your neighborhood would probably scowl at you for showing this one to their kids - that's no way to solve conflicts!

Do you have anything to add to this page? Have we made any mistakes... or do you have any additional information about Adventures Of Popeye? If so, we would love to hear from you. Please send us a quick note with your additions or corrections to this page, and we will make the corrections as soon as possible!

Below are comments about this cartoon submitted by people who have seen this show. Take a look and see what others have said about Adventures Of Popeye. We want to know what you think, too!! Feel free to share your own opinion- we do want to hear from you! You can add your own comments here.

Comments By: Mike Newman
When I first saw this back in the 1960's Thought it was great. Made popeye look almost real. there were only a few made like this. I can only remember the other one was when a boy in the movie theater tossed popeye a can of spinach .

Comments By: dingdog
Probably the finest "cheater" cartoon ever made. According to Leslie Cabarga, the film may have been put together when a group of Fleischer animators circa 1934 resigned en masse; this also was the catalyst for low-totem-pole animator Jack Mercer...  (read more)
1 of 30 people found this comment useful

Comments By: G.B.
A very cute, funny, and entertaining film, albeit not a very PC one with today's message of conflict/resolution for kids. I love seeing the old clips from past films. Some people think this kind of episode is a rip off, but I disagree. Blending the...  (read more)
1 of 27 people found this comment useful

Comments By: Nostalgia Kid
This Is the first "Popeye"Cartoon to ultilize both live action and stock footage in a funny and inventive Fashion.As A little kid(Representing the viewers)is being picked on by a tough street punk and is left crying and feeling humiliated.But before...  (read more)
6 of 29 people found this comment useful 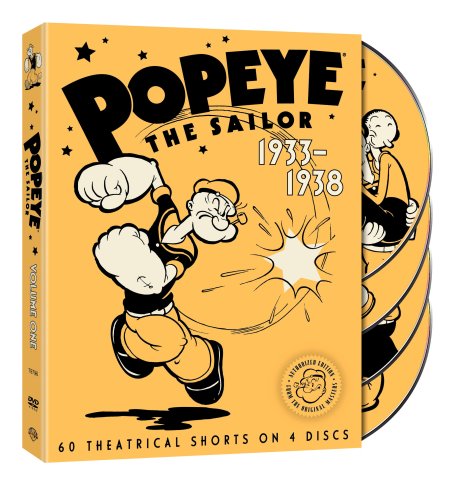