Post your Comments or Review
This page has been viewed 2120 times this month, and 13277 times total.

Mostly repeats what was already seen in the original Lion King (which I didn't like either), but this one is even more boring. There is no part of the movie where the story would feel "real" for me. I had to force myself into watching the entire movie because it was so boring.

Not worth watching even if you did like the original.

5 of 44 people found this review helpful

I myself did not find it all that bad. The animation is rather shabby when compared to the original, and nowhere near as clean. But I do have to admit that the storyline was halfway decent. I think that Disney just tried too hard to make it as good as (or better than) the original. My favorite song has to be He Lives in You, and the score was even ok. Zira was the best character in the whole movie, but a little too much like Scar. There were a lot of plot holes that most certainly should have been filled. Disney could have done a lot better on it, maybe hired the original animators or something? Overall, as a true TLK fan I'd certainly add it to my collection. It doesn't merit the title "Worthy Sucessor" but it'll do.
6 of 38 people found this review helpful

One more of Disney's Enduring Classics and a wounderful successor of the original Lion King!

Two thumbs up!
9 of 42 people found this review helpful

If you're looking for a film that can capture the feel of the original Lion King, don't pick this title up. Simba's turned in to the over protective father from hell. His daughter, Kiara, is the find of offspring you would love to tie a large rock to and drown. Fighting for the force of evil is Zira who is as close to a female carbon copy of Scar as you can get. Her son, Kovu, looks like a mix between a younger Simba and Scar (esp later on in the film). Kovu's older brother, Nuka, has huge potential but his character is almost completely overlooked and he ends up coming off as an annoying fool. Rafiki, Timon and Pumbaa make a return however all three have suffered complete character assassination.

The music is fairly normal for a Direct To Video title, only two of the songs retaining any feel of the original Lion King title, the rest of the songs feeling like carbon copies of songs from the first film. The animation is fair, though details change often (like the bite in Zira's ear tends to roam from ear to ear randomly)

However, this is still a good film if you're looking to entertain younger people or if you feel like veging out on the sofa for an hour and a half. Zira is evil enough to entertain and there are enough moments of actual comedy to raise a chuckle or two. This film is nowhere near as good as the first film, but then again no one expects it to be and Simba's Pride does have the power to stand up on it's own four paws. You're either going to love it, or hate it.
0 of 24 people found this review helpful

I didn't think it was too bad, actually. Thanks to the film I now love Neve Campbell, and also my worship of Timon increases evermore. Kovu was beyond cool. Those eyes..wow. If Harry Potter ever turned into a lion, he'd look like Kovu. !! My god! He'd even have a scar! Dun dun dun!
1 of 28 people found this review helpful 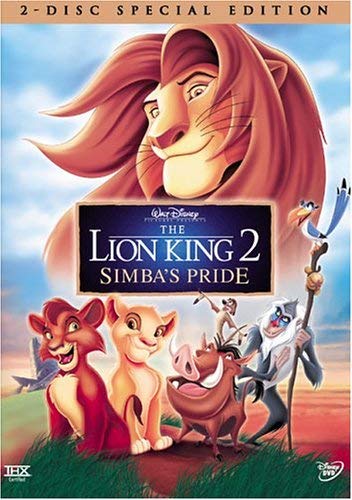