Post your Comments or Review
This page has been viewed 2243 times this month, and 7546 times total.

Foxy and Roxy say goodbye amid gunfire and violenc

This was the third and final appearence by Mickey Mouse rip-off Foxy and his girlfriend Roxy. Foxy is a police officer, threatening everybody for acting crazy. He involves himself in a shoot-out with a gang and the short ends with him getting shot, literally, in the rear. Symbolic of the characters failed appeal..?
3 of 218 people found this review helpful

"One More Time" is an antique cartoon: a relic from an era when sound was new and characters had huge, googly eyes adapted to a harsh world in black and white. The story is boilerplate cops and robbers, and gets its title from the song the characters sing throughout its length. And it's a very hot song: a jazzy, cautionary tale fit for any burlesque house or gambling backroom. Brave Officer Foxy represents law and order, and he doggedly pursues the baddies in a Prohibition-age world of rubbery menace where everybody sways and bounces to the music's devilish rhythm. The animation team of Hugh Harman, Rudolf Ising and "Friz" Freleng produced three Merrie Melodies starring Foxy, and "One More Time" is their meanest. In 1931 they were still walking in Disney's footsteps, so their thugs are jowly, scruffy lowlifes of uncertain species (presumably canine), whereas Foxy wears a resemblance to a certain rodent who will go nameless here. The toon's simple plot gets personal when the thugs abduct girlfriend Roxy, but Foxy rescues her and corrals the fleeing toughs straight to the jailhouse. As he padlocks the door, the angry jailbirds deliver the song's finale through the barred windows. In triumph, our hero assumes centerstage and takes his bows while Roxy looks on dreamily. However, the cocky officer ought to be watching his back, because a baddie is taking aim from a manhole with a machine gun. Foxy takes one bow too many and provides a perfect target for the mug who opens fire. With a cry of "Yeowwww!" that lasts to the closing fade, poor Foxy throws up his arms and grinds his rump helplessly on the pavement as the mug spanks him with gunfire. The moral: "Crime does not pay, but getting the last laugh does."
102 of 129 people found this review helpful 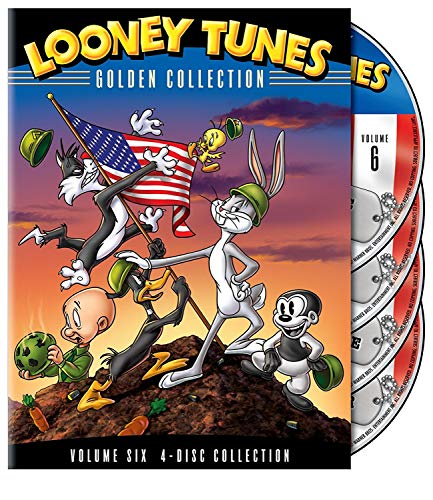