Post your Comments or Review
This page has been viewed 726 times this month, and 3501 times total.

Picnic Panic is a unique little film. It's actually a color continuation of the earlier "Toddle Tales" series which usually bookended live action footage of some overly cute kids with around a cartoon character adventure. This is probably the best one of the genre simply because the character designs are unique. Three young girls traipse into a kitchen and find an animated Tea Pot trio rather jauntily singing a ditty titled "Rhythm on the Range" ( in this case a cook stove!)

After the little gals break into smiles an old duffer "Mr. Coffee Pot" speaking in a "norvegian" accent tells the tale of an ill fated picnic he and his tea pot wife and tea cup kids experienced, and we zoom off to cartoonland. Some pretty good personality animation is evident, and like "Sunshine Makers", there is a definite sense of happiness that radiates throughout the proceedings. Their picnic is crashed by a cow, who would later be christened "Molly" aand be featured in her own series. Eventually she is chased off having inhaled too much of the exhaust from Mr. Coffee Pots picnic basket automobile, and the film concludes with a reprise of the catchy little jingle heard at the beginning of the story, with the little gals happily laughing at their antics.

Quite different from the average Van Beuren fare, this is a neat little cartoon, and definitly rates as a lost treasure. Can't really call it a classic though, it's rarely seen. 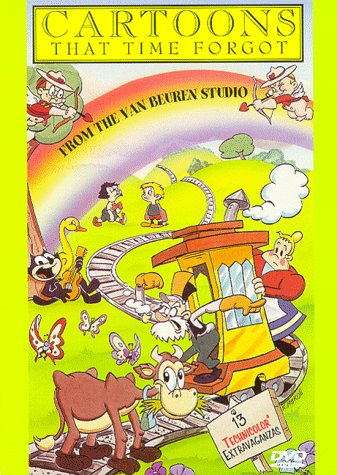