Post your Comments or Review
This page has been viewed 2036 times this month, and 6740 times total.

Here's where it all began. This was Daffy's first assault to the world. I say that without hyperbole either. You see, up to this point in animation, cartoon characters had to behave a certain way. Mainly, they had to follow the formula of character creation that Disney laid out. It's the only thing animation producers would accept.
However, Leon Schlesinger at Warner Bros. didn't put such limits on his artists. He didn't care if they followed formulas or not. All he cared about was making money. So, Tex and his animators (one being a young Bob Clampett) decided to shake things up a little. They started this cartoon like an average Porky Pig cartoon. This time he was a duck hunter. However, one of ducks he faced jumped around on a lake shouting WOO HOO WOO HOO for absolutely no reason, thereby breaking every rule the animation community was a slave to. Walt Disney would have been outraged by such a thing. However, the public was extatic. That duck was a breath of fresh air in the stale depression-laden world they lived in.
Not only did this cartoon give us Daffy, it laid the foundation of all WB cartoons to come. In fact, Ben Hardaway used the setup of this cartoon to make Porky's Hare Hunt which would gradually lead to the birth of Bugs Bunny. Any remnants of the starchy, suppressive Victorian era died at this moment.

This is the first cartoon inwhich Mel Blanc took over as the voice for Porky. The previous voice-man, Joe Dougherty, had a genuine stutter and proved more of a liability than an asset. Blanc could easily control the stutter which made things easier for the Warner directors. Also, Blanc gave Porky more of a likable personality. Under Dougherty, Porky was more of an empty stutter gimmick really.
However, this cartoon holds much more significance than that. For this marked the debut of the one, the only DAFFY DUCK!!! This was the moment that Porky's ability to introduce other characters really paid off. If Porky hadn't got so confused that he had to re-read the script, who knows how well Daffy's WOO HOO reaction would have been received. The Warner cartoons were finallyon the map. It's somewhat ironic that, at the same time that Snow White was dazzling audiences with it's state-of-the-art multi-plane graphics and epic story-telling, this cartoon was causing just as big a stir with a miniscule fraction of Snow White's budget. With character alone, the Warner studios were on the map.
Actually, this cartoon would lead to the making of another cartoon similar in content called Porky's Hare Hunt (Ben Hardaway c. 1938). This time, Porky is hunting a rabbit. A rabbit that would eventually become Bugs Bunny. It's almost as though two of the greatest characters ever created came from the same cartoon in a way. However, where would they have been if it weren't for the unsung performance of the ever-supportive Porky?

1 of 12 people found this review helpful

This is where the Tex Avery legend really begins. The cutesy, Disney-like gags and slow, deliberate pacing of the early Warner Bros. cartoons finally starts to be shed like an old snakeskin here, besides introducing a character that would last through more than a half-century of his animator's best permutations.

It begins typically enough, with Everypig Porky preparing for a day of hunting (as Elmer Fudd would start doing three years later, when Tex Avery created Bugs Bunny). Porky tries to reassure his scared hunting dog (improbably named Rin Tin Tin) that his gun isn't loaded and accidentally fires it through the ceiling--rankling the pants (and the demeanor) of "the guy from upstairs," who comes down to punch Porky's lights out.

On to one of the funniest cartoon duck hunts ever, even after years of variations afterward. Porky takes aim at one high-flying duck, only to be scared into the bushes when a million other local hunters get the same idea and shoot skyward. The duck travels on unassailed, whereupon the sea of hunters all wail, "Aw, shucks!" Another hunter, dramatically cross-eyed, aims at a bird and shoots down two, count 'em, two airplanes instead.

Porky then takes aim at a duck sitting atop a barrel of discarded liquor. He misses the duck but opens the barrel, happily for a hard-drinking group of fish(!), whose drunken rendition of "Moonlight Bay" calls to mind the final scene of Wagnerian Elmer Fudd in What's Opera, Doc? twenty years later: the image is so majestically funny, you're not sure whether to laugh at it or embrace its perfection.

Porky finally knocks Daffy Duck out of the sky and sends Rin Tin Tin to fetch him out of the river. By the time they reach shore, though, it's the dog who's waterlogged and the duck who throws him ashore. When Porky complains that this moment wasn't in the shooting script, Daffy reassures him, "Don't let that worry ya, skipper. I'm just a crazy, darn fool duck!" and hoo-hoos, dances, and skates across the pond, in Looney Tunes' first throwing down of the gauntlet at Disney's overly precious style of animation. Daffy does the same routine later, after Porky's gun jams and Daffy nonchalantly unlodges it for him.

After Porky returns home--sadder, wiser, and duckless--he takes one more shot out his window, at some duck who are doing a perfect shooting-gallery pantomine up in the sky (another of Avery's priceless images). Porky succeeds only in putting a second hole in the-guy-from-upstairs' pants, who comes down and socks him a second time. But that's too mild of a closing gag. Instead, we're left with Daffy doing his hoo-hoo routine over, up, and around the closing "That's All, Folks!" titles, again offering Walt Disney his first serious competition in cartooning.

Even if it hadn't introduced Daffy Duck to an unsuspecting world, Porky's Duck Hunt would be memorable enough for its Mad Magazine-type peripheral gags, which make the early Warners cartoons look like the Disney-envious fillers they are. A new force in animation was slowly evolving, without which Cartoon Network might be mostly Felix the Cat reruns.

2 of 17 people found this review helpful 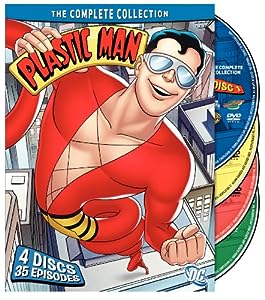