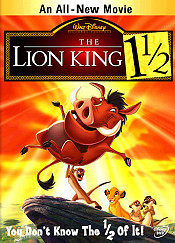 Alternate Title: The Lion King One And A Half

Post your Comments or Review
This page has been viewed 1151 times this month, and 8595 times total.

I've been following the production of this movie since I first heard about it in either '99 or 2000. At first it didn't look all that great to me, I thought "Oh GOD, a Timon & Pumbaa show MOVIE?" Yet, I've always been one to give something a chance before I dismiss it (well, almost always) so I said "Alright, we'll give it a go." Hence started my search for more info on this movie. Four years after my search began, I'm finally ready to give my opinion on it.
Now that I've seen some trailers and clips, it doesn't seem so bad. The animation is just a shade under the quality of the original movie, and is MUCH better than The Lion King 2. The storyline, which wasn't too appealing when I first heard it, is actually starting to make sense. It looks as if Disney really cares about this movie. Heck, it looks as if Disney's trying to make up for TLK2! It also looks as if it's not gonna be TOO reminiscent of the Timon and Pumbaa show, but I'm reserving judgement on that portion of it for until I actually see the movie. Overall, it looks like it's gonna be worth the money spent on it. I'm reserving most judgement for now, however. When I see it, I'll post another review with my updated opinion. But just to let you know, despite my hatred of most sequels, it seems as if finally we're getting what we as TLK fans really deserve.
3 of 27 people found this review helpful

I think it's great that there is going to be yet another Lion King movie on the screen of our tv. I loved the first one,and thought the second one was cool, and I can't wait to see what is in between those two movies. I hope that there soon will be yet another sequel for this endless classic.
LION KING RULES!!!!!!!!
4 of 17 people found this review helpful

Okay...I loved the first, admittedly...it took a film like Mulan to knock this film into second place for my all time favourites and even then I was reluctant to change that vote...but for the love of god! Enough already! There are two movies already! Often two is more than enough! But one and a half??? For the love of...whatchi..aye-hee...*goes off into a tangent of untranslatable gibberish and passes out from lack of air*
3 of 32 people found this review helpful 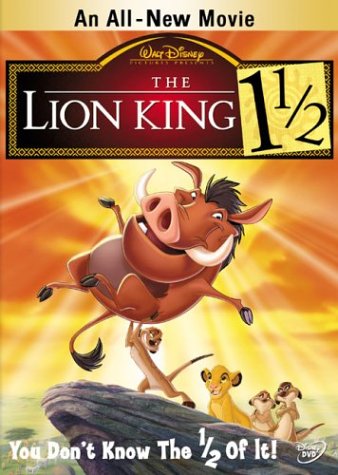