Post your Comments or Review
This page has been viewed 352 times this month, and 5140 times total.

Honestly, the Disney guys should've done better than this.
The present movie has none of the thrills or high drama of the original.....and very few of the original laughs. The film has a neat opportunity to explore the Thunderbolt character & one Dalmation pup's meeting with him, but too much time's spent in making Patch finally discover that his hero's a disappointment. And Thunderbolt seems like such a schmuck that it immediately reduces audience empathy. Much more could've been made of the damage done to his reputation upon bumbling up all his rescue attempts.
Thunderbolt's sidekick, Lil' Lightnin', seems to have a lot more potential for character development than the scriptwriters allow him; instead, he's thrown away as virtually a secondary villain. The writers build him up as this second-banana who loses all the she-dogs to the star, making him a likeable underdog......and it's long after we've all figured out that LIghtnin' has rigged Thunderbolt's firing from his TV show that the movie reveals this particular detail.
Also, Patch's whole extended family--human and dog--are completely forgotten and not brought back till, say, the final 12 minutes, thus eliminating any real chance of drama. It's motivation enough for pulling out one's copy of the original.
About the only really good point here is that all the Dalmation pups have English accents in this movie.....the original mainly had the snotty-nosed American kids that director Woolie Reitherman preferred.
0 of 27 people found this review helpful 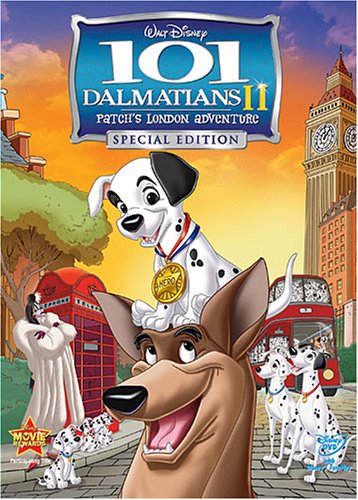