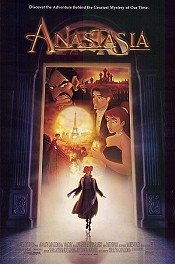 by Dave Koch Post your Comments or Review
This page has been viewed 4330 times this month, and 27572 times total.

I love this film for sentimental reasons. I've always been fascinated with all things Russian, whether it be sports, music, history, culture.

I've had great interest in the Imperial Family long before seeing this film, but it was this film that reinvigorated me and inspired me to become even more interested in them. I couldn't care less about the many inaccuracies; there is no historically accurate film about this particular family, so much of it is still shrouded in mystery. And besides, it's not like they're trying to be Disney and stamp the label "Based On A True Story" or "Inspired By A True Story" like Disney has done in the past.

But enough of that for now. Here's my comments on the film as a whole.

What made the film for me was David Newman's magnificent score. The songs are mostly mundane, with the exception of "A Rumor In St. Petersburg," which can get on one's nerves if you aren't familliar with the Russian sound, and especially "Once Upon A December." The animation effects (the "Once Upon A December" scene, the nightmare, Paris, the haunted train, the final battle) are extraordinary, but not as great as the earlier Don Bluth masterpieces like Land Before Time, American Tail, or Secret of NIMH. The script is pretty good when you take it as it is, as a fairy tale. The acting is fair, considering most of them had no experience with animation before. Overall, fairly well done, but could have been better.

To conclude, the A&E Biography of the real Anastasia had a section on this film, and tells it like it is: The grim facts of Anastasia's all-too-brief life had been replaced by a fantasy born of the human desire for a happy ending." So if you want a fantasy, see this film. If you want the brutal, horrifying truth of it all, read "Nicholas & Alexandra" by Robert K. Massie.
2 of 56 people found this review helpful

The first thing about Anastasia is that it isn't just historically inaccurate. It is totally incorrect and references to real history limit to the names of few persons.
Another flaw is that there's a Disney Puppy(tm) problem, with what I mean (wild) animals that are extremely cute, like to walk close to humans, etc. Those are well known from most older Disney animations and thus the name... Those creatures are irritating and tend to break the good feeling with otherwise great animation films.
There's another thing that I'd normally consider a flaw, but in this case I'll do an exception, because Fox's animators actually managed to fit it in correctly. The thing I'm talking about is having undeads or other such magical/supernatural things that just don't belong in fairy tales.
Yet another thing is that I typically hate musicals and Anastasia is largely a musical...
Okay, now that we are thru with the flaws (and you must already be wondering why rating of 5, if there are so many flaws in it)...
The story has very classical elements and that still seems to work, even after seeing the other animations and seeing Anastasia (too) many times. It's just very touching and even though there are comedy elements, those don't break the story and turn it into a comedy. I won't go into details, as many of the readers haven't already seen the movie and might get spoiled.
There are quite many musical sequences, but fortunately they take the story forward all the time and they fit quite well in the movie in a non-musical sense as well. The songs are good and well performed.
I liked the movie quite much after the first time I saw it, and began to like it more and more every time I watched it again. This if anything is a good sign of rich content and interesting story and is the main reason why I'm giving it 4.5, which rounds to 5 points here.
The drawn backgrounds and shadows are sometimes slightly spartan, but generally the drawing quality is extremely good, and there are some very well done 3D composites (using 3D-projected drawings, but no 3D shading). The style is consistent and fits the movie well. Coloring of figures is done with computer (unlike the backgrounds that are painted by hand), but that combination looks quite good as well.
The amount of graphical detail is much higher than you'd think, and you'll only notice many of these details after seeing the movie quite many times. For example, when Anja takes off her coat and gloves, you'll see them lying on the floor some shots later, or she's carrying them with the luggage.
There are also other interesting kinda hidden details such as where did uncle Boris live after all, etc :)
The interesting extras on the (scandinavian PAL) DVD include couple of "making of" style documents, one with Aaliyah's "music video" of one of the movie songs (but unfortunately they cut off the end of that). There's also dubbing featurette that contains couple of the movie songs in alternating languages (Russian, Icelandic, Korean and many others you don't get full soundtracks for).
The movie is nice anamorphic progressive 2.35:1, but unfortunately all the extras are interlaced 1.33:1.
The soundtrack is in 384 Kbit/s DD 5.1, but I haven't had chance to listen it with anything better than stereo so far. I'd bet that it is actually pretty much stereo only, as the movie is quite old and it's animation film.
The Finnish dub is very high quality and it is on par with the original English version. I haven't tried the other languages there are on the DVD, but the dubbing featurette gives a feeling that nearly all dubs are very well done and consistent. There are couple of exceptions too, though. Unfortunately the full Russian soundtrack is not available on the DVD I have.
This movie is definitely in my personal top-5 list of animation films. That list includes Shrek and Ice Age as well, but I'm not sure about the other places.
You can get the DVD for less than 9 euros already, so just go get your copy and watch it with your girl/pal or even alone - you just cannot lose :)

4 of 52 people found this review helpful

The movie is interesting, but it completely screws up actual events. (I know it's a fantasy, but still) Now I'm no history buff, but I've gone to school enough to know that the Czars were a bunch of stuck-up horrible people. Why do you think they were murdered? Because they cared about themeselves and their royalty, and neglected their duties of governing Russia properly. They left their own soldiers to fend for themselves during WWI, without supplies or anything. This movie makes it look more like a dark version of the Sleeping Beauty "wonderful family" thing.
Oh, and in real life, the daughter Anastasia was found to be murdered as well.
1 of 53 people found this review helpful

Tricky subject material for an animated film. The addition of Bartok added some much needed humor. The animation itself is very pretty and there is a great music score. A movie to be enjoyed by older kids and adults.
6 of 39 people found this review helpful 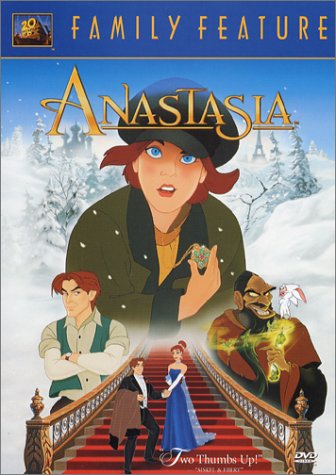 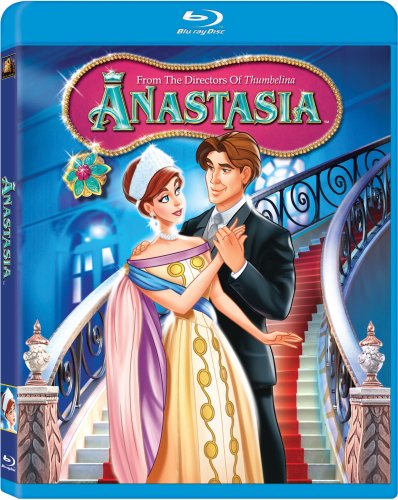