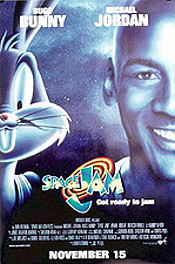 by Dave Koch Post your Comments or Review
This page has been viewed 804 times this month, and 11965 times total.

Tries to be Roger Rabbit 2, but is Cool World 2

I've always had an interest in live-action/animation, and so when Space Jam came out, I thought of having a look, expecting another brilliant film.

Unfortunately, that wasn't the case.

The animation itself was good, as was the music. Sadly, those are the only two things I can really credit about this film. So, praise for the musicians and artists where praise is due. Otherwise, this film is very much pointless.

Michael Jordon, appearing as himself, has retired from basketball at a critical moment for the Toons (who have moved from Toontown and are living down a golfhole in Birmingham Pines Country Club), who are facing a basketball duel with some crudely-drawn aliens and their boss (voiced brilliantly by Danny De Vito, I must say), and so they bring in Michael to train them how to play expertly.

As well as that, Lola Bunny is thrown into the plot to pester Bugs Bunny in a style not seen since Minerva Mink. While I'm not really a purist, and I do like Lola's character, I must point out that Lola's role was already filled by Honey Bunny.

What Warner Bros. failed to realise when rushing into Space Jam is that even live-action/animation films require a plot. Having seen Bob Hoskins with Roger, Warner Bros. seemed to have said "Let's do that with Bugs and some other guy" and gave it no thought.

I like to think that this film is more like Cool World (1992), in the sense that they both tried to capitalise on the success of the same film without giving much thought to what was at hand.

If you prefer a film with a plot, I suggest you try Roger Rabbit. As I've said, this film's only good for the artwork and the music.
3 of 65 people found this review helpful

Space Jam was Warner Brothers' Studios' attempt to recreate the magic of 1988's Who Framed Roger Rabbit. It combined live actors with the animated Looney Tunes, and played up the interaction between the two.

Sadly, WB tried too hard: big name Michael Jordan was brought in, plus a legion of cameo appearances, and some digital trickery. Space Jam's problem is that the elements were assembled first, and the story was crafted around them, which made the film seem contrived and commercial.

On the happy side, almost the entire WB animated menagerie made at least a token appearance, and computer assisted gradient shading of characters was tried out. There were many gags that worked, though some were clunkers. And this was an original feature for the Looney Tunes, as opposed to the retreads of cartoon shorts, such as "The Bugs Bunny / Road Runner Movie."

For fans of Michael Jordan: the man gets most of the spotlight, and is the supreme hero of the film.

For general moviegoers: this is family fare that might keep children entertained, with no sex, no expletives, and only the cartoon violence of *wham*splat*boom*. Not much here for grown-ups, though. Space Jam is a rental, not a keeper.

For dedicated 'toonists: the Looney Tunes were hammered badly to fit into an awkward storyline. Skip this mishmash entirely.
4 of 64 people found this review helpful

Yes, I know. It's certainly an odd choice for this list you're all thinking. Everyone knows that the Looney Tunes were either watered-down or just plain castrated in that movie. Why is it being singled out as a career point for Porky? Well, I'll explain.
You see, Porky acted as the straight man in the Looney universe for many years. However, in this movie, Michael Jordan was to provide the straightness for the Looney Tunes to play off of. They certainly couldn't have two straight men on screen together. (Would you pay to see Bud Abbott and Dick Smothers perform together?) Therefore, it was imperative that Porky find new schtick. Unfortunately, since most of the original artists from the original studio were dead by this time (and the ones still alive had little to no power over the characters) Porky's new schtick was given to him without any thought as to his true personality. So, the powers that be transformed Porky into a nervous wimp. Sort of a Woody Allen without pants. (I guess only Soon-Yee, Mia Farrow and maybe Diane Keaton know how funny that is.) And that is how Porky is perceived today. This personality is even still present in the new Duck Dodgers tv series. (Donald Duck went through a similar transformation when he was added to the cast of Duck Tales back in 1988. His temper was traded for him becoming a clumsy doofus.)
In a way, the new wimpish personality rampant in the current Porky is an unfortunate reminder that every cartoon character from the classic era has undergone a similar fate. Whether it be a watered-down persona or gratuitous editting of alleged questionable content, the toons have been pillaged by corporations giving to wacko special interest groups and have left them pale shadows of their former selves.
Gone is the Porky that would stick his dog's tail in the pencil sharpener, constantly throw Charlie Dog out of the apartment, or use Daffy as a machine gun. I say that we need Porky's brand of sass now more than ever if toons are ever to survive.

Yes, pretty much the entire Looney Tunes cast were heavily damaged in this movie. Much of their core personalities were stripped away to make room for more "politically correct" elements. Tweety was certainly no exception. His ultra-sadistic nature was certainly toned down in order to score a G-rating.
But, surprisingly enough, a core element of Tweety was restored in this movie. Many people deplored the scene where Tweety uses martial arts to defeat the Mon-Stars surrounding him. But, really, that was Tweety going back to his "Clampett" roots. THERE was the little powerhouse with the same strength he had in A Gruesome Twosome, Tweetie Pie, Bad Ol' Putty Tat, etc.

Tweety was almost back in form had it not been for the most foul of concepts, Baby Looney Tunes. It was here that any remaining edge Tweety had was completely stripped away in favour of simple empty baby talk.

Oh, and pretty much every other part of the movie sucked as well. Director Joe Pytka's only previous film experience was McDonalds commercials. No wonder this film looked like one long ad for Nike.
2 of 63 people found this review helpful

Space Jam is a delightful movie suitable for every member of the family. The cartoons are the usual exhilarating Looney Tunes (and they are all there) and Jordan seems to be performing one of his best...games. The story is interesting and reveals the meaning of cartoons.
1 of 42 people found this review helpful

You know - when a movie like this comes out to cater to such a specific group of people, it's just a travesty. I hate to say that I have to give this piece of garbage such a bad review. I'd love to have enjoyed this film, but it's just so so so so SO VERY WRONG. The Looney Tunes DO NOT play basketball. They played it because Jordan did. This isn't a globetrotters cartoon, for goodness sake. I know I'm trying to make sense of a cartoon, which is already a weird thing to do, but you just don't resolve planetary enslavement issues through BASKETBALL GAMES. I cannot possibly express my immense distaste for this vile thing. I can only say that I wish people would avoid ever watching it. Please do not buy rent or watch this movie ever. It is horrid. If I'm to find any redeeming factor in it, it would be that 1.) The animation is good, as would be expected from a film in which they spent as much to draw it as to pay the human stars, and 2.) Kath Soucie - wonderful Kath - did the voice of Lola Bunny. She helped a lot to maintain my sanity while watching the film, and I thank her for that.
2 of 43 people found this review helpful 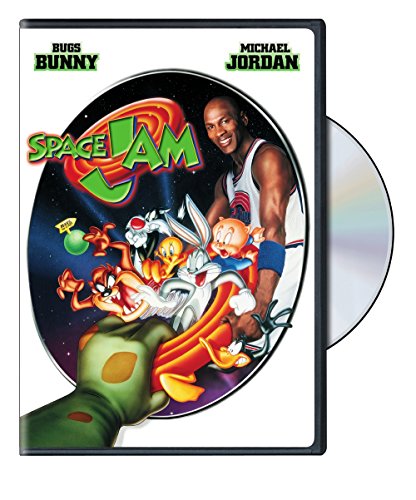