Post your Comments or Review
This page has been viewed 3388 times this month, and 16190 times total.

One Of The Great Disney Semi-Feature Length Cartoo

I love this cartoon! My father, Andy Engman, also contributed animator work, altho' he seems uncredited on this site.
It was one I grew up watching. I still cry at the "Johnny Fedora and Alice Blue Bonnet," and "Willie the Singing Whale" stories. I love the new DVD, very cool stuff.
Not every moment is total classic, but overall a 5 star, worth every penny for the DVD.
Drew Engman
4 of 28 people found this review helpful

These "potpourri" musicals Disney made in the late 40's are usually variable, but this is my favorite among that batch.
The Disney guys are always at their best in animation emphasizing characterization, and those musical sketches stressing this are those that work best.
But one of the centerpieces here always struck me as Disney at his all-time worst: his attempts to duplicate the artistic success of "Fantasia" with a jumbled treatment of "Peter and the Wolf." I have yet to see a successful visualization of this piece....better to hear it on records, since this is largely a "theater-of-the-mind" piece, geared to help youngsters learn about some of the instruments of the orchestra. The Disney guys turn it into pure sap.
BUt "Casey at the Bat," "Johnny Fedora & Alice Bluebonnet," "The Martins & the Coys," and especially "All the Cats Join In" and "Willie the Singing Whale" more than make up for what surrounds them.
2 of 36 people found this review helpful

Great Disney story telling had to be destroyed

Make Mine Music has a big collection of many Disney favorites, like "Peter and the Wolf" and "Casey at Bat", but the Disney Video/DVD realese was striped of an entire sequence "The Martins and the Coys". Unknown to newer generation, the aforementioned sequence was made by Walt himself but removed because of the "Politically correct" people from Disney belived it was racist, and encouraged drinking and smoking. I don't think any Texan hillbilly will boycot Disney for that. That is disrespect on Walt Disney's work; because of those censors "The Martins & Coys" may be lost forever. Make Mine Music is a great movie:5 stars. New Disney censors:0 stars.
7 of 30 people found this review helpful 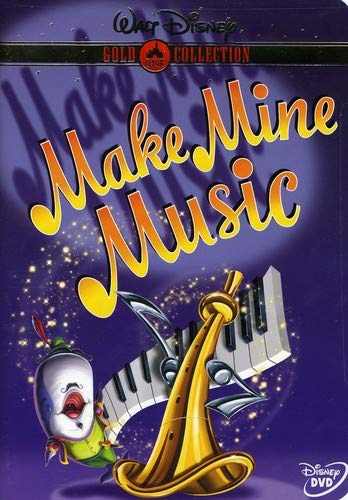