The Adventures of Raggedy Ann and Andy

Alternate Title: The Adventures Of Raggedy Ann And Andy

by Dave Koch Post your Comments or Review
This page has been viewed 238 times this month, and 881 times total.

Synopsis (series): This series chronicles the absolutely adorable adventures of Raggedy Ann and Andy in which they often leave the play room and venture out into a more "mystical" version of the Deep Deep Woods from the film "Raggedy Ann and Andy: A Musical Adventure".

Synopsis (Episode): In this episode, Raggedy Andy stumbles upon a lost baby and takes it to Ann and the rest of their crew. They discover that the child is the young prince of a neighboring magical kingdom and decide to try to restore him to his family. Unfortunately, the child is in danger. A sinister male character has taken over the throne and really just wants him gone.


What I love about it? For the series, I just love that it's Raggedy Ann and Andy. They're adorable. What I love though about this specific episode is just how overly adorable it is. The art/animation work is really sweet and the storyline is like eating candy for me. Sugary. Awesome. And seeing Raggedy Andy holding the prince. Too cute.

What attracted me to it? The dolls. I love Raggedy Ann and Andy in general.


What do I dislike? Raggedy Ann and Andy's VAs. Raggedy Ann is usually, in most cartoons, intended to sound young, but with a lot of wiseness in her voice that denotes age. This Annie sounds mainly like an adult VA trying to be a little girl. Much the same goes for Andy.
0 of 13 people found this review helpful 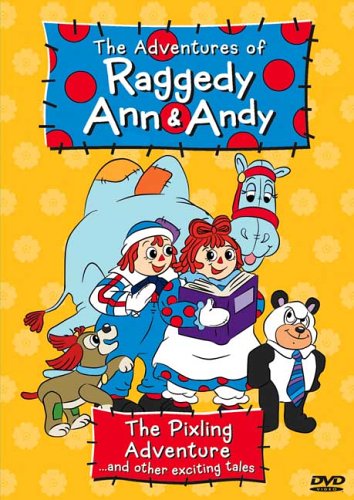