Additional Information about the TV Cartoon The Late Donald Duck

by Dave Koch Post your Comments or Review
This page has been viewed 449 times this month, and 1843 times total.
>Unknown Tag: 'short_stud_crew'

Here's a twist: instead of taking established cartoon characters and making them younger, Disney's Quack Pack did just the opposite. Huey, Dewey, and Louie, the adorably bratty nephews of short-tempered Donald Duck, grew up into Gen-X slacker teens for this show, which also featured Uncle Donald and his girlfriend Daisy.

Donald now worked as a cameraduck for a TV news program, usually paired with reporter Daisy on assignments. Daisy and the boys had apparently attended speech therapy classes, and they now spoke without the duck accent. Donald, of course, was as angry and unintelligible as ever. The "extreme teens" lived with their uncle in a modest suburban house, idling away their days playing video games, watching television, and hangin' at the mall. But like any good cartoon duck, when adventure called, they answered.

The stories on Quack Pack were usually more down-to-earth than the globetrotting adventures of the nephews' earlier series, DuckTales, and the emphasis was usually on comedy over danger. Things did get wacky, however, with the help of Professor Ludwig Von Drake, whose inventions turned the trio into the super-powered T-Squad ("...with muscles, brains, and speed to spare!") so they wouldn't have to clean their rooms. The boys' nemesis was usually their dear old uncle, although occasionally a master criminal or Zalthroobian Overlord would rear his ugly head.

With an Eddie Money theme song and sass to spare, Quack Pack arrived as part of the Disney Afternoon weekday block in the fall of 1996. Only one season's worth of episodes were produced (39 in all) before the show was cancelled. When Huey, Dewey, and Louie were reached for comment, they just shrugged and said, "Whatever."
Traditional, Hand-drawn Animation.

Do you have anything to add to this page? Have we made any mistakes... or do you have any additional information about The Late Donald Duck? If so, we would love to hear from you. Please send us a quick note with your additions or corrections to this page, and we will make the corrections as soon as possible!

Do you love The Late Donald Duck, or do you think it is the worst cartoon ever? Let us know what you think! Surely you have an opinion... so share what you think. Take a minute and post your own comments about this cartoon here. 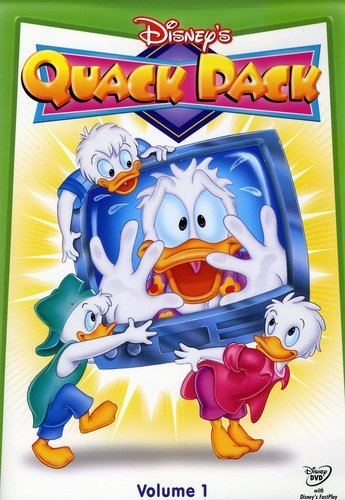