Additional Information about the TV Cartoon Long Way To Morning

by Dave Koch Post your Comments or Review
This page has been viewed 312 times this month, and 1256 times total.
>Unknown Tag: 'short_stud_crew'

The weekly syndicated series told the story of a very powerful race of winged creatures, who were cursed to dormancy in the year 994 A.D. The curse was lifted 1000 years later when the gargoyles were resurrected in modern-day New York City. Taking up residence in the clock tower of the 23rd Precinct of the N.Y.P.D., these nocturnal beasts fought to defend and save those they loved, and destroy the evil that surrounded them.

The gargoyles, led by the fearless Goliath, had an innate mistrust of humans due to past betrayals. The only human they did trust was a police detective named Elisa Maza, who helped Goliath and fellow gargoyles Hudson, Brooklyn, Lexington, Broadway, Bronx, and Angela to assimilate into modern society. The brave detective also helped her stone friends understand other humans, who usually responded to the flying monsters' efforts with fear and prejudice, despite the protection the gargoyles provided.

The gargoyles had their work cut out for them when it came to protecting their environs, since the forces of evil were powerful and omnipresent. One of their biggest rivals was a gargoyle named Demona, who was betrayed along with the others in 994 A.D. and was now bent on committing genocide. The heroes also battled corrupt businessmen like David Xanatos, gangsters like Anthony Dracon, the mad Dr. Anton Sevarius, a clone named Thailog, and others villains such as Illuminati and the Children of Oberon.

Both the animation and the writing were very advanced for a "children's" cartoon, full of symbolism and references to mythology and Shakespearean literature. Disney cancelled the show's syndicated run in 1996, but ABC immediately snatched it up, renaming it Gargoyles: The Goliath Chronicles. The revamped show, with a new staff of writers and animators, ran on ABC's Saturday morning schedule for less than a full season.
Traditional, Hand-drawn Animation.

Do you have anything to add to this page? Have we made any mistakes... or do you have any additional information about Long Way To Morning? If so, we would love to hear from you. Please send us a quick note with your additions or corrections to this page, and we will make the corrections as soon as possible!

Below are comments about this cartoon submitted by people who have seen this show. Take a look and see what others have said about Long Way To Morning. We want to know what you think, too!! Feel free to share your own opinion- we do want to hear from you! You can add your own comments here.

Comments By: sinisterlemon
In retrospect "Long Way To Morning" may seem a bit silly to Gargoyle purists (as we discover later on in the second season that Demona in fact outweighs Hudson in terms of conscious, waking, life experience); but overall the story works--and works...  (read more)
3 of 19 people found this comment useful 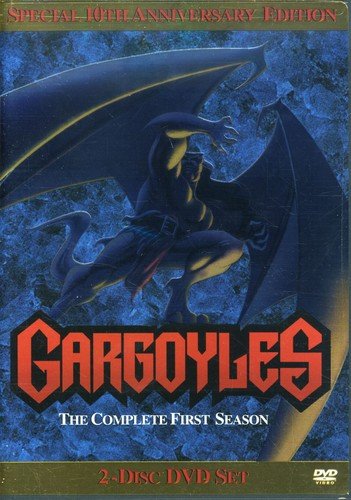