Walt Disney Studios : Television : Disney's Adventures of the Gummi Bears : The Secret Of The Juice

Additional Information about the TV Cartoon The Secret Of The Juice

The Secret Of The Juice

The Secret Of The Juice

by Dave Koch Post your Comments or Review
This page has been viewed 111 times this month, and 1133 times total.
>Unknown Tag: 'short_stud_crew'

The premise had six Gummi Bears protecting Princess Calla and her boy-page Cavin in the Kingdom of Dunwyn. The bears got their power from Gummiberry Juice- made by Grammi Gummi- which gave them the ability to bounce like no bear had ever bounced before. The potion came in handy in defeating the assembled ogres and other nasties who opposed the Gummis in every weekly episode. No bears were eaten during the making of this cartoon.

In the fall of 1989, the Gummi Bears joined everyone's favorite non-edible bear, Winnie the Pooh, in Disney's Gummi Bear/Winnie the Pooh Hour. The new arrangement lasted one season before the Gummis were again reassigned, this time to the Disney Afternoon block. One year later, the show found a longer-lasting home on cable's Disney Channel.

Rocky and Bullwinkle's June Foray and Bill Scott voiced characters on this show, as did Garfield and Friend's Lorenzo Music and Married...With Children's David Faustino, who played one of the four Cavins.
Traditional, Hand-drawn Animation.

Do you have anything to add to this page? Have we made any mistakes... or do you have any additional information about The Secret Of The Juice? If so, we would love to hear from you. Please send us a quick note with your additions or corrections to this page, and we will make the corrections as soon as possible!

Do you love The Secret Of The Juice, or do you think it is the worst cartoon ever? Let us know what you think! Surely you have an opinion... so share what you think. Take a minute and post your own comments about this cartoon here. 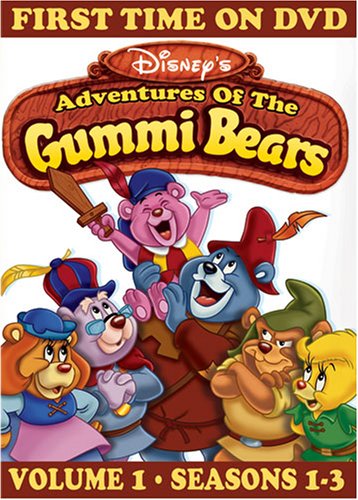 The Secret Of The Juice More DVD's