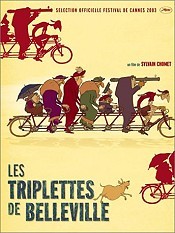 English Title: The Triplets Of Belleville

Post your Comments or Review
This page has been viewed 266 times this month, and 2696 times total.
>Unknown Tag: 'short_stud_crew'

Premiered at the Cannes Film Festival.

Dream sequences by Bruno (the dog) are in black and white.

The film, five years in the development, includes references to many performing artists of the past, including Max Fleischer, Charles Trenet, Django Reinhardt, Jacques Tati, Fred Astaire and Josephine Baker.

There's a pair of moments in Les Triplettes de Belleville (The Triplets of Belleville) that personify perfectly the kind of storytelling feat that Sylvain Chomet has achieved. It should be said now and placed at the very forefront: this is an 80-minute long feature film done almost entirely without dialogue. Therefore, the first viewing is bound to leave its audience a little lost in exactly where it's going and to what purpose certain characters and scenes are for. But back to those moments. While Mme. Souza, the main character, is staying with the elder Triplets, she tries to utilize a few items around the house, each time being shooed off by the old ladies: the refrigerator, the vacuum, and a newspaper. Are they senile? Eccentric? With no dialogue, it's unclear at first what their purpose is. The payoff comes ten or so minutes later, though, as the Triplets come out to do their musical act, using those very three esoteric items as instruments.

In some ways, staying on top of Chomet's story takes a certain amount of mental trickery and agility. Because everything is seen but not explained, it takes a damn good memory to keep an eye out for what each payoff is going to be. The plan of the mafiosos who steal the three French bikers does not come to the fruition of our awareness until it actually occurs in front of us. Same for Souza's purpose of simply watching the mouse-like mechanic as he is shaved by the local barber. Nothing is known until it occurs. It's a unique way of telling a story, and probably the best way to do it at that. By this, we are silently treated to the character development of Mme. Souza, whom without words is revealed as one of the most determined, witty, and inventive grandmothers to ever be concocted on screen. The Triplets may hold the title of the film, but it is easily Souza's story. She is the motivator and hero of the film's events.

Much will be made, and rightfully so, of Chomet's graphical style. Certainly that is one of the main draws of the film; in fact, given how much the story has to tell visually story-wise, it's possibly the most important element. Characters are defined very much by their physical attributes and bodily expression. In my opinion, the best examples of this are the mafioso henchman, brilliantly conceived as living rectangles who, when joined with a partner, seem to mold into one being. Their presence is immediately physically imposing, and they join the ranks of silent villains like the Penguin from Wallace and Gromit: The Wrong Trousers for creating villainy out of sheer nothingness.

Chomet seems to be channelling his spiritual influence from the work of the Fleischers. Certainly this is most apparent in the film's beginnings, as it starts in the past looking at the Triplets performing at a grand theatre like a Greek chorus to several other acts. This section is easily the most "cartoony", sporting tap shoes that eat their Astaire-like owner and male patrons that turn into literal monkeys at the sight of a topless dancer in a banana skirt (a warning to worrisome parents: the two instances of questionable content is the aforementioned topless dancer and a few prostitutes in the Triplets' building - brief, but definitely visible). The rest of the film is not so obviously Out of the Inkwell, but it still shares the same nature of inhabitants exhibiting their souls in their entire physical appearances, and also in some of the more hilarious slapstick moments. The best of such moments would be when one of the Triplets produces an unseen grenade by the coastline, sits down, tosses it in, and lets the explosion shower frogs for eating into her fishnet. In these moments, the plot starts to mirror the silliness of the world around it.

I have a couple of peccadillos, though. By the film being so wordless, it naturally reduces the plot to the most simple of levels. This is not a particular problem in and of itself; simple stories can be very nice when well-told, and Chomet's exercise in silent storytelling is, for the most part, very successful; additionally, it leaves room for the kind of visual satire that he excels in. But by doing so, he does rob a few characters from having some depths that even a few words could've provided. Souza's grandson, Champion, is one such example. He has more character in the beginning of the film, as a depressed and lonely little boy, than he does for his primary role as a kidnappee. A curious question arose to me when I watched it - Champion obviously trains very hard to be an excellent biker. But whose motivation is it to engage in such athletic torture: Souza's or Champion's? Souza's care and obvious love for him make it seem like Champion is self-motivated, but her stringent whistling and his bored, tired glaze make it seem like Souza's the disciplinarian in the situation. Unanswered, Champion is robbed of a certain dimension, and he is simply a plot device, a goal for Souza to reach. The dog, Bruno, has more character depth. This applies to the Triplets as well. While they're wonderfully conceived and have brilliant character-revealing moments, their motivation is ambiguous. They seem to join Souza's quest because....well, just because. Sure, they befriend her, but that mafia is a little too imposing for there not to be a more direct line of reason for the three of them.

I also have a problem not with the film itself, but Sony Picture Classics' manner of release. I won't say anything about the limited release business, since that applies to zillions of great but unseen cinema. Rather, it's about neither subbing nor dubbing it. There are two lines in English, one in the beginning and one in the end, and they're fairly similar. Other than that, everything is in French with no translation. Yes, the film is essentially dialogue-less, as none of the main characters speak. But there's still French in the air, and I was wondering if I was missing anything. This was most apparent in the bike race, when there was a steady stream of French coming from the sports announcers. No, it's not necessary, but a little dubbing (and it would've been very easy, given that the character does not appear on screen; subbing would've been odd because of that very fact) certainly would've helped the transition into the bike race, especially for those of us unfamiliar with their proceedings. At that point in the film, which is quite early, I was still getting used to the film's style, and being entirely immersed in a language that my understanding of is cursory at best didn't help. It seems lazy on Sony's part.

Despite that, this film was very amusing and endlessly interesting to look at. We need to encourage films like these, especially in the face of men like Eisner who think that we don't like cel animated films. I wouldn't suggest taking your kids to this (if the couple of moments of raunch don't turn them off, the lack of dialogue will), but I do suggest going on your own. It's a unique film, and one that needs to be seen to be believed.

Do you have anything to add to this page? Have we made any mistakes... or do you have any additional information about Les Triplettes de Belleville? If so, we would love to hear from you. Please send us a quick note with your additions or corrections to this page, and we will make the corrections as soon as possible!

Do you love Les Triplettes de Belleville, or do you think it is the worst cartoon ever? Let us know what you think! Surely you have an opinion... so share what you think. Take a minute and post your own comments about this cartoon here. 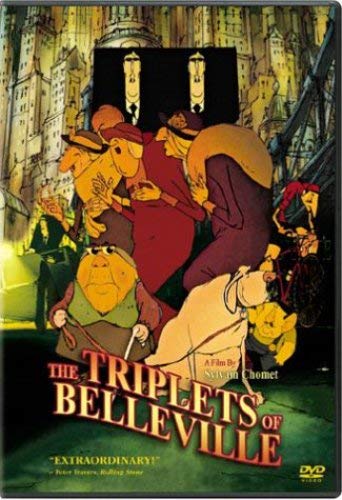