by Dave Koch Post your Comments or Review
This page has been viewed 3618 times this month, and 20934 times total.
>Unknown Tag: 'short_stud_crew'

Release date reflects the date of general release to the public. This film went into limited release the week before the general release, with shows in Los Angeles and New York.

With the success of the last film, #31 on the list was eagerly anticipated by audiences all over the world. By all accounts, Aladdin did not disappoint. Still a musical, but heavy on the adventure and the comedy, served up at an energy level that only comic crazy Robin Williams could achieve.

Aladdin was first proposed by Howard Ashman during the build up to The Little Mermaid in 1988. Beauty and the Beast writer Linda Woolverton took a whack at the story and directors John Musker and Ron Clements picked it from among three projects offered as a follow up to 1989's The Little Mermaid. (The other two projects offered were Swan Lake and King of the Jungle – which would morph into The Lion King).

Screenwriters Ted Elliott and Terry Rossio were brought in to clean up Musker and Clements first drafts. They dropped Aladdin's mother, and make Jasmine the main female character. Aladdin's was changed from a 13 year old boy to an 18 year old young man. The character was updated to be more like Tom Cruise than Michael J. Fox, and "a little rougher, like a young Harrison Ford." His dancing- and, to some extent, his wardrobe, was inspired by rapper M.C. Hammer. The parrot Iago, originally to be a calm and serious character, was reworked into a manic role inspired by Gilbert Gottfried's character in Beverly Hills Cop II.

But the production really hit its stride when Robin Williams came on board as the Genie. In an unusual move for an animated film, the directors had Williams' ad-lib all his dialogue. Musker and Clements would give Williams topics and direction for the dialogue, but allow him to just go crazy with his lines. Eric Goldberg, supervising animator for the Genie, then reviewed Williams' recorded dialogue and selected the best gags and lines to fit into each scene. Typically, animators work from established dialogue. But in the case of using a someone so known for on the spot improvisation as Williams, letting him go wild was probably the best way to create more energy ion the film.

Williams did the film for scale- $75,000- but demanded that neither his name or image could be used to promote the film. Disney reneged on the deal, and this caused a rift between the two that lasted years. The first two direct to video Aladdin sequels featured Dan Castellaneta voicing the Genie because of this. Williams remained miffed at the studio until Katzenberg left, and his replacement Joe Roth apologies for the studio.

Further controversies continued to follow the film; one was incited by the American-Arab Anti-Discrimination Committee (ADC) who felt the lyrics to the opening song "Arabian Nights" were offensive to their sensibilities. Specifically, they felt the line "Where they cut off your ear if they don't like your face" portrayed Arabs in a demeaning light. In July 1993 the line was changed to "Where it's flat and immense and the heat is intense."

Later, Anna Runge and the American Life League suggested (among other allegations) that Aladdin says "Good teenagers, take off your clothes," to Rajah the Tiger during the balcony scene. The groups considered this a subliminal reference to promiscuity, and totally inappropriate for inclusion in a film their kids watched endlessly. Disney's official statement was the line reads "Good kitty, take off and go..." and the word "kitty" is overlapped by Rajah's snarl. After the word kitty, a second voice can be heard which has been suggested was accidentally grafted onto the soundtrack. Because of the controversy, Disney replaced the phrase with "Down, kitty" on the DVD release.

The film was made for about 28 million dollars. It ended up making back 20 million its first weekend, and 207 million US /504 million worldwide in its initial release. A slow climber, it opened as the number two film in the US, but by its fifth week had risen to number one, a rank it held 5 times during its 22 week run. Aladdin is the twenty-sixth highest grossing animated film and the third highest grossing traditionally animated feature worldwide, behind The Lion King and The Simpsons Movie.

Aladdin set a new record for video sales, according to The Guinness Book of Records. The video was released in North America in October 1993, and had sold over 24 million units in the United States and Canada by April 1994.

The film achieved record admissions in Brazil, where the video sold 280,000 units, also setting a new record for video sales in that country. The video also set a sales record in Japan (2.2 million copies by 1997).

Although the sultan allows Aladdin and Jasmine to wed, they don't actually manage this until the end of the second sequel.

This was the 31th film in the official Disney list of animated films.
Estimated budget of $28 million.
This film made $504 million in it's initial theatrical release.
Hand Drawn / Computer Assisted Animation.

Aladdin is based on “Alaeddin; or, The Wonderful Lamp,” from The Book of the Thousand Nights and a Night- often referred to as The Arabian Nights. In adapting the ancient tale, the Disney team moved the story from it’s underpinnings of greed and corruption to relate the moral lesson that “what you are on the inside, not what you have on the outside, is most important.”

The distinctive production design of Aladdin relies on shapes and color to add emphasis to emotion and story action. The long, angular sharpness of Jafar contrasts with the round, soft curves of the Sultan both in character and settings. Similarly, the predominant red and black colors of Jafar contrast with the cool white, gold and blue of the Sultan.

Much of the styling of the Genie owes its visual origin to the intricate, playful curlicue of Persian miniatures, as well as to the distinctive, free-flowing curving lines of famed caricaturist Al Hirschfeld. The Genie is a triumphant tour de force for animator Eric Goldberg who was brought to Disney especially for the job. Goldberg went on to co-direct Pocahontas (1995).

In order to animate Aladdin's character song "One Jump Ahead," animator Glen Keane studied live-action dancers as they choreographed the movements of Aladdin running through the marketplace. The final animation was not a literal transcription of the movements, but rather added the illusion of a fleet-footedness that few (if any) human beings possess.

One of the most difficult characters to animate was the Magic Carpet, for a twofold reason: "... the Carpet has no face, no voice, he has no body. It's sort of acting by origami," animator Randy Cartwright explained. The second problem was the intricate Persian pattern on the carpet, which was finally "wallpapered" onto the finished hand-drawn animation by means of a computer program.

Do you have anything to add to this page? Have we made any mistakes... or do you have any additional information about Aladdin? If so, we would love to hear from you. Please send us a quick note with your additions or corrections to this page, and we will make the corrections as soon as possible!

Below are comments about this cartoon submitted by people who have seen this show. Take a look and see what others have said about Aladdin. We want to know what you think, too!! Feel free to share your own opinion- we do want to hear from you! You can add your own comments here.

Comments By: damfine
The Genie and the monkey made that movie worth watching. The rest was a sucky Harlequin romance wanna-be. Yeck!
8 of 77 people found this comment useful 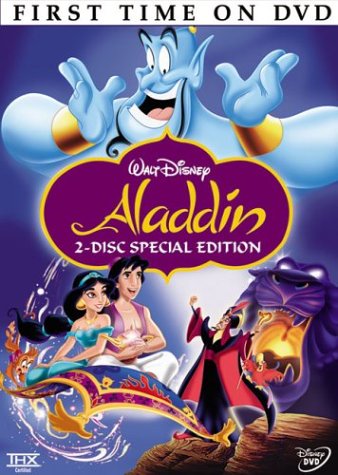