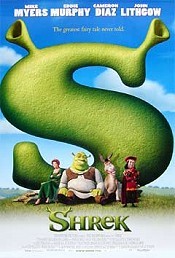 Post your Comments or Review
This page has been viewed 1982 times this month, and 9008 times total.
>Unknown Tag: 'short_stud_crew'

The first animated film nominated for an Academy Award for best adapted screenplay.

For all of its digs at Disney cartoons, Shrek is the most refreshing and original movie to hit theaters in quite a while.

Yes, it does take some well-earned potshots at Disney icons, and I also noticed a few nods to Monty Python and the Holy Grail and even Citizen Kane. But what Shrek most resembles- in spirit- are the irreverent "Fractured Fairy Tales" that Jay Ward produced for TV. Like those classics, Shrek is kind enough to (a) use its satire as throwaway gags, rather than loudly calling attention to its genius, and (b) assume, like all the best cartoons, that both adults and children can enjoy a well-made, hilarious animated movie.

The story has great fun with turning fairy-tale conventions on its head, starting with the "Once upon a time" tale which the ogre Shrek (voiced by Mike Myers) reads so sweetly and then ends up using as... well, perhaps I shouldn't say it here. Suffice to say, the movie turns a lot of cliches about love's first kiss inside out by way of demonstrating that, by golly, true love really can come to those who wait, even ogres.

In the meantime, Shrek acquires a sidekick (a donkey with the voice of Eddie Murphy) who himself is enough of a wink at Disney cliches, in that he is actually funny and has a personality. Shrek and the donkey save an imprisoned princess (Cameron Diaz), and that would be enough story for most cartoons right there. But by the time the princess is saved, the movie is only one-third finished, and the princess is an original enough character to be annoyed at the manner of her rescue.

And that is the charm of Shrek, because just when it seems to follow familiar paths, you find that the movie's makers have quite a few surprises to unfurl. Like the best animated films. Shrek has densely filled landscapes, characters, and plot twists that make most of its live-action movie competitors look puny in comparison.

Kudos are richly deserved all around, from the great voice actors (including John Lithgow as a snotty and diminutive prince), to skillful directors Vicki Jenson and Andrew Adamson (never is a shot too lingering or too short), to the gifted writers who adapted the original children's book- and to DreamWorks Pictures, which has tried hard the last couple of years to be a contender and pretender to the Disney throne. This time, they might just have succeeded.

Do you have anything to add to this page? Have we made any mistakes... or do you have any additional information about Shrek? If so, we would love to hear from you. Please send us a quick note with your additions or corrections to this page, and we will make the corrections as soon as possible!

Below are comments about this cartoon submitted by people who have seen this show. Take a look and see what others have said about Shrek. We want to know what you think, too!! Feel free to share your own opinion- we do want to hear from you! You can add your own comments here.

Comments By: StevenBailey
For all of its digs at Disney cartoons, "Shrek" may have been the most refreshing and original movie to hit theaters in 2001.
Yes, it does take some well-earned potshots at Disney icons, and I think I noticed a few nods to "Monty Python...  (read more)
3 of 31 people found this comment useful

Comments By: Tronic
This movie is pretty much a comedy, but fortunately Dreamworks crew managed to keep the story together even though it is tightly packed with jokes and parody. The story works quite well, and is kinda touching. Cannot really tell more about it without spoiling...  (read more)
2 of 29 people found this comment useful

Comments By: alecpele
This is great production by Dreamworks. It seems that digital cartoons are gaining more and more fans nowadays and 'Shrek' is an additional reason for that. The characters are wonderful, and the story very interesting. I think Edie Murphy is great...  (read more)
7 of 43 people found this comment useful

Comments By: toonwizz
WONDERFUL !!! Shrek was a pure delight to watch, i laughed aloud at this movie many a time. Eddie Murphy as Donkey was hilarious. The soundtrack is the best i have heard in years. Don't rent this , BUY it!!!!! You will not...  (read more)
4 of 26 people found this comment useful 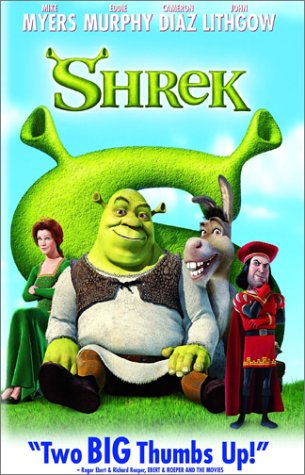 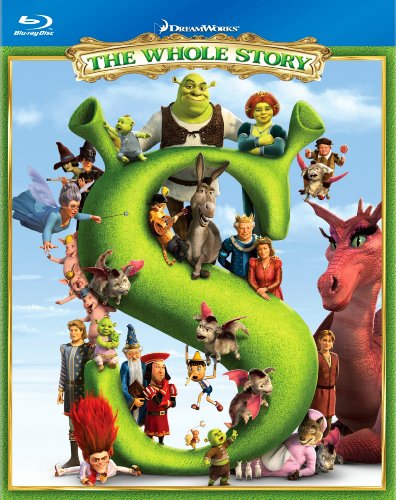