by Dave Koch Post your Comments or Review
This page has been viewed 181 times this month, and 968 times total.
>Unknown Tag: 'short_stud_crew'

Professional wrestling had been around long before television, but the mid-80's brought new levels of popularity to the much-maligned "sport." Due to the business savvy of Vince McMahon, pro wrestling became one of the most successful entertainment ventures in the world. Relying heavily on the "good guy vs. bad guy" storyline and giving each wrestler ample time to speak to the viewers at home, McMahon's World Wrestling Federation became a national phenomenon. It was only a matter of time before a Saturday morning cartoon was developed based on the WWF.

The show featured any wrestler who was popular at the time (Jimmy "Superfly" Snuka, The Junkyard Dog, etc.), but the focus was on the WWF's biggest star, Hulk Hogan. Hogan, who was a positive role model for all, never turned down an opportunity to help out those in need, the springboard to the plots of most episodes. In many cases, Hogan was forced to ally himself and his "good guy" cronies with the "bad guy" wrestlers in order to get things done. The bad guys were usually only looking out for themselves and reverted to their abhorrent ways immediately after solving that week's crisis.

There were two half-hour episodes per show.

The series also featured live segments in which Hogan, along with announcer "Mean" Gene Okerlund, would relay a positive message to the kids, generally one that fit with the day's episode. The show satisfied its "rock" quotient by featuring a montage of the wrestlers performing a variety of acts, backed up by popular tunes in highlight reel fashion. The concept for the series came from musician Cyndi Lauper, who often appeared in the cartoon as herself.

Amazingly enough, none of the wrestlers provided his or her own voice for the cartoon. Apparently, the eloquence they showed in pre- and post-match interviews was too difficult to capture in a voice-over studio. Hogan's cartoon voice was performed by Brad Garrett, who would eventually find fame as Robert Barone on the popular CBS series Everybody Loves Raymond.
Traditional, Hand-drawn Animation.

Do you have anything to add to this page? Have we made any mistakes... or do you have any additional information about Cheaters Never Prosper? If so, we would love to hear from you. Please send us a quick note with your additions or corrections to this page, and we will make the corrections as soon as possible!

Do you love Cheaters Never Prosper, or do you think it is the worst cartoon ever? Let us know what you think! Surely you have an opinion... so share what you think. Take a minute and post your own comments about this cartoon here. 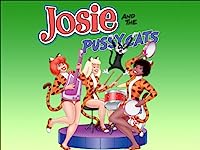