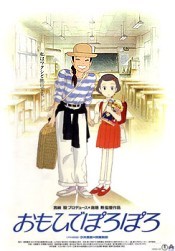 Post your Comments or Review
This page has been viewed 1988 times this month, and 6833 times total.
>Unknown Tag: 'short_stud_crew'

This film was never released in North America in any format until it was screened at Vancouver's Pacific Cinematheque on December 29, 2012 as part of a Studio Ghibli retrospective.

"The Anime Encyclopedia" speculates that a United States release is possible due to a deal between Walt Disney Studios and Studio Ghibli. Designer Yoshiharu Sato was a member of the team involved in Disney's "The Tigger Movie" (2000).

Based on Hotaru Okamoto and Yuko Tone's original 1987 story, which was serialized in "Myojo" weekly.

The framing device of a middle-aged office lady in 1984 was devised by director-writer Isao Takahata specifically for the film; originally, the story concentrated on the misadventures of Taeko as a 10-year-old.

Do you have anything to add to this page? Have we made any mistakes... or do you have any additional information about Omohide Poro Poro? If so, we would love to hear from you. Please send us a quick note with your additions or corrections to this page, and we will make the corrections as soon as possible!

Below are comments about this cartoon submitted by people who have seen this show. Take a look and see what others have said about Omohide Poro Poro. We want to know what you think, too!! Feel free to share your own opinion- we do want to hear from you! You can add your own comments here.

Comments By: bitoslead
It is a superb love story, where we can both learn a lot about Japan, and not only on Tokyo !!
A lot of countryside scenes, a lot of emotion.
Some scenes are so beautiful you could even ask your self if it is not filmed, but it always keep...  (read more)
1 of 22 people found this comment useful