Post your Comments or Review
This page has been viewed 90 times this month, and 318 times total.
>Unknown Tag: 'short_stud_crew'

The second television series starring those lovable, huggable, super-caring bears was produced by Nelvana, the animation company who brought The Care Bears Movie (and its two sequels) to the big screen. Airing on ABC's Saturday morning schedule in 1986, The Care Bear Family brought new bears and new villains to the time-tested mix.

The title characters were created by American Greeting Cards in 1981, a multicolored bunch of bears with names that matched their personalities: Funshine Bear, Love a Lot Bear, Grumpy Bear, etc. Just in case anyone was still confused, each bear had an identifying symbol on his or her furry tummy.

Hailing from the clouded land of Care-a-Lot, the Care Bears descended to earth in their Cloudmobile whenever the infallible "Caring Meter" pointed to some lonely boy or girl who needed a smile and a hug. If things got too hairy, the bears could always resort to the "Care Bear Stare," which sent beams of good will from the bears' combined bellies, enough to soften even the gloomiest heart.

And gloomy hearts there were, indeed. The new nemesis of our fuzzy heroes was a meanie named, appropriately, No-Heart. Backing up the villain in his selfish deeds was the bumbling Beastley, who was more comic than criminal.

But never fear, young ones, for the Care Bears had friends of their own, the Care Bear Cousins. Brave Heart Lion, Bright Heart Raccoon, Playful Heart Monkey, and other kindly woodland creatures left their homes in the Forest of Feelings whenever their bear kin needed a helping paw or hoof.

The new series ran on Saturday mornings for two seasons before entering syndication under the title Care Bears in 1988. The syndicated series mixed new episodes in with the old, ensuring many more years of caring, sharing, and bearing.
Traditional, Hand-drawn Animation.

Do you have anything to add to this page? Have we made any mistakes... or do you have any additional information about Ski Trouble? If so, we would love to hear from you. Please send us a quick note with your additions or corrections to this page, and we will make the corrections as soon as possible!

Do you love Ski Trouble, or do you think it is the worst cartoon ever? Let us know what you think! Surely you have an opinion... so share what you think. Take a minute and post your own comments about this cartoon here. 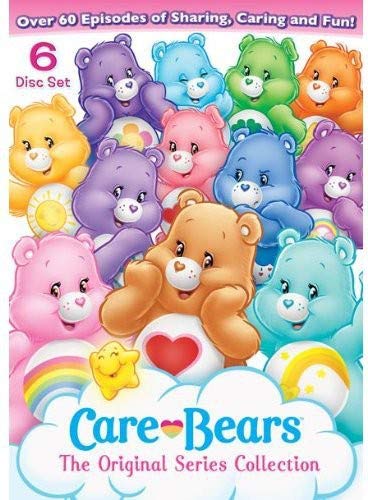