Other Studios : M : Marvel Productions : Transformers : Roll For It

Additional Information about the TV Cartoon Roll For It

by Dave Koch Post your Comments or Review
This page has been viewed 125 times this month, and 647 times total.
>Unknown Tag: 'short_stud_crew'

The title song promised "More than meets the eye," and for over four seasons of syndication, The Transformers delivered. Robots who transformed into vehicles, weapons, boom boxes, and eventually dinosaurs, insects, animals and more, waged an eternal battle of good Autobots versus evil Decepticons. Hasbro premiered its line of morphing toys in the spring of 1984, following up with a comic book series that summer and a syndicated cartoon at the end of the year.

The story of The Transformers begins on the planet Cybertron, home to both Autobot and Decepticon. When the Autobots head for their ship to seek out new energy reserves, the Decepticons attack, leading to a crash landing on Earth several million years B.C. An erupting volcano in the present day reactivates the dormant robot/vehicles, and the battle begins anew, led by good robot/big rig Optimus Prime and bad robot/big gun Megatron. Helpful humans Spike and Sparkplug Witwicky befriend the Autobots and aid their cause. In later seasons, other humans would join each side, like wheelchair-bound wunderkind Chip Chase and the arch evil Dr. Archeville.

Production was underwritten by Hasbro, but the series always promised more than simply a half-hour toy commercial. Written and recorded in America, the series was animated in Japan and South Korea. The entire series was based upon the Diaclone and Microman toy lines originally created by Japanese toy manufacturer Takara, which were developed into the Transformers toy line by American company Hasbro. The plots were elaborate, often in two, three, or five parts, with a constant influx of new ?bots: Dinobots, Constructicons, Aerialbots, Insecticons, etc. The show employed the voice talents of some of the best in the business, including the legendary Frank Welker as Megatron and others, all mechanically altered to make the characters sound more robot-like.

In 1986, Transformers: The Movie was released in theaters, featuring the voices of Leonard Nimoy, Eric Idle, Robert Stack, and in one of his final performances, Orson Welles as the evil transforming planet Unicron. A 1993 series, Transformers: Generation II, revamped old episodes with computer-generated bumpers and transitions. And in 1996 the Transformers craze was reborn with Beast Wars, a new series of toys and cartoons that introduced another generation to these "Robots in disguise."
Traditional, Hand-drawn Animation.

Do you have anything to add to this page? Have we made any mistakes... or do you have any additional information about Roll For It? If so, we would love to hear from you. Please send us a quick note with your additions or corrections to this page, and we will make the corrections as soon as possible!

Do you love Roll For It, or do you think it is the worst cartoon ever? Let us know what you think! Surely you have an opinion... so share what you think. Take a minute and post your own comments about this cartoon here. 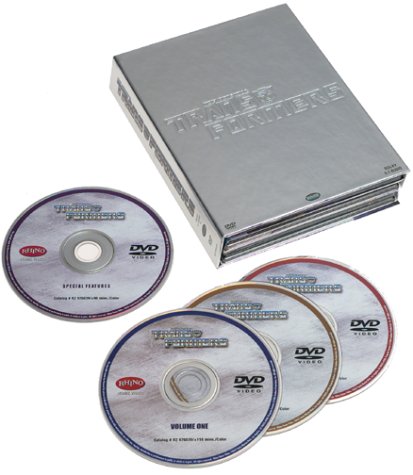 Roll For It More DVD's