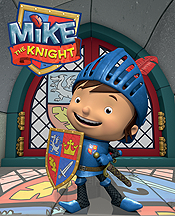 Mike The Knight And The Scary Noise

Mike The Knight And The Scary Noise

by Dave Koch Post your Comments or Review
This page has been viewed 119 times this month, and 609 times total.
>Unknown Tag: 'short_stud_crew'

This CGI-animated TV series consists of 26 half-hour episodes, each containing two cartoons in most markets. CBeebies aired a single 13 minute episode a day.

Mike the Knight is a brand new 52 part CG-animated series bringing the excitement and enchantment of medieval times into the life of the modern pre-schooler for the very first time. In each action-packed episode, viewers are transported to a world filled with marvellous missions, castles, dragons, Vikings and trolls.

In the medieval land of Glendragon lives Mike, a boy with a big future. The son of the King and Queen, Mike is determined to grow up to be a great and noble knight, just like his dad. This brave hero is joined on his knightly missions by his companions Squirt and Sparkie -- two extraordinary and eccentric dragons -- and his trusty steed Galahad. Mike's sister Evie, a trainee wizard, often tries to lend a hand, even though her spells often hinder rather than help her brother's progress! Along the way, Mike discovers the power of responsibility and doing things the right way, abiding by his triumphant motto of "Be a knight, do it right!"

Mike is an energetic, cheeky yet bountiful young knight-in-training, driven by his passion to help others and, along the way, be the best knight he can be. With his father, the King away exploring faraway lands Queen Martha has put Mike in charge of helping her protect the Kingdom of Glendragon.

Determined to do his best, through comedy and adventure with his rallying cry 'Be a knight, do it right' Mike learns the power of responsibility and how to do things the right way.

With a little help from his Big Book for little Knights in training, the would-be-hero rises to each episode's mission with the help of his closest friends: Sparkie and Squirt a pair of friendly, quirky dragons, and his trusty steed Galahad. Never far from the action and always willing to help out is Mike's fun and free-spirited sister Evie, a wizard in training.

At the start of each new challenge, Mike dons his armour and is ready to tackle anything from horse riding to helping prepare for feasts and festivals, from guarding the castle to good citizenship and, of course, knowing how to rescue a princess.

He is aided in his pursuits with some nifty medieval gadgets, including his enchanted sword and his shield. Thanks to one of Evie's spells Mike is never quite sure what magical object will appear when he draws his sword. But what the valiant apprentice fails to realise is that the object will always come in handy for completing the mission of the day.

Topping and tailing each episode is Fernando, the resident bard, who acts as the storyteller. Incredibly funny, his witty ditties begin and end each episode on a humorous note.

This chivalrous new series is set to send young viewers on an enchanted voyage of discovery.

Do you have anything to add to this page? Have we made any mistakes... or do you have any additional information about Mike The Knight And The Scary Noise? If so, we would love to hear from you. Please send us a quick note with your additions or corrections to this page, and we will make the corrections as soon as possible!

Do you love Mike The Knight And The Scary Noise, or do you think it is the worst cartoon ever? Let us know what you think! Surely you have an opinion... so share what you think. Take a minute and post your own comments about this cartoon here. 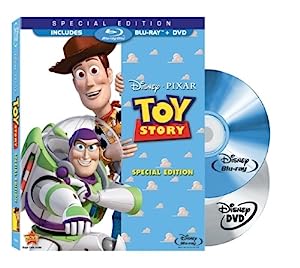