Hanna-Barbera Studios : G-J : Godzilla : The City In The Clouds

Additional Information about the TV Cartoon The City In The Clouds

The City In The Clouds

The City In The Clouds

The City In The Clouds (1979) - Godzilla Cartoon Episode Guide

Post your Comments or Review
This page has been viewed 89 times this month, and 1295 times total.
>Unknown Tag: 'short_stud_crew'

Godzilla was a 300-foot tall, fire-breathing lizard, mutated by Man's folly of repeated atomic experiments. The creature, known as Gojira in Japan, has been around since the 50's, when Japan's Toho Studios seemingly cranked out a Godzilla film every month or so. Godzilla vs. Mothra, Godzilla vs. King Kong, Godzilla vs. Frankenstein's Daughter; if it was big, rubbery, and around in the 50's and 60's, Godzilla fought it. The movies served as a faint inspiration for this series, which made its debut in 1978.

The long, strange run of Godzilla begins on September 09, 1978 in the show The Godzilla Power Hour. Unfortunately, The Godzilla Power Hour show lasted only two months in this incarnation. In November of 1978, the format was stretched to ninety minutes by adding Jonny Quest reruns and changing its name to Godzilla Super 90. The first seasons of Jana of the Jungle and Godzilla continued in this new show.

Then, in September of 1979, the show was separated from it's "partner" shows and aired solo under the new, simpler title of Godzilla... which was just fine with Godzilla. He'd been a loner his entire career, and didn't need help from anyone, least of all from a kid secret agent or some blonde with a traveling petting zoo.

NBC thought otherwise, however, and after a month Godzilla once more found himself with a buddy, this time, reruns of The Super Globetrotters under the show title of The Godzilla/Globetrotters Adventure Hour. This ran the rest of the 1979 season, even aired two times per Saturday from April 12th to September 20th of 1980. This would be the final show to air the first run of this cartoon series.

The show gained new buddies and began in reruns on September 27, 1980, in the The Godzilla/Dynomutt Hour with the Funky Phantom until late November 1980, when it metamorphosed into The Godzilla/Hong Kong Phooey Hour, which ran until May 15, 1981.

Godzilla came full circle on May 23, once again headlining his own half-hour rerun show until finally being taken off the air on September 5, 1981. This guy knows how to get around!
Traditional, Hand-drawn Animation.

Do you have anything to add to this page? Have we made any mistakes... or do you have any additional information about The City In The Clouds? If so, we would love to hear from you. Please send us a quick note with your additions or corrections to this page, and we will make the corrections as soon as possible!

Do you love The City In The Clouds, or do you think it is the worst cartoon ever? Let us know what you think! Surely you have an opinion... so share what you think. Take a minute and post your own comments about this cartoon here. 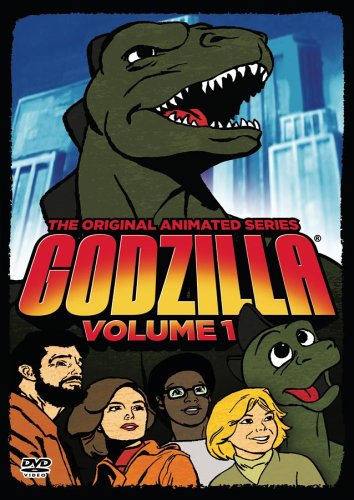 The City In The Clouds More DVD's