Additional Information about the TV Cartoon Haunted In Inn

Post your Comments or Review
This page has been viewed 153 times this month, and 1491 times total.
>Unknown Tag: 'short_stud_crew'

In 1776, a cowardly New Englander named Jonathan Muddlemore grabbed his cat, Boo, and hid from British soldiers inside a grandfather clock in an old, abandoned mansion.

Two hundred years later, a vicious storm forced three teenagers to hole up in the mansion, where they proceeded to reset the aforementioned clock to midnight. This action released the ghosts of Muddlemore and Boo, and the pair teamed up with the teens to fight crime.

Dubbed "Muddsey" by the teens, the still cowardly Muddlemore turned invisible whenever he got frightened, which was quite often. The gang rode around in the Looney Duney dune buggy, crisscrossing America and stomping out evil. Boo's ghost had a dustup in every episode with Elmo, the teen's pet bulldog.

Animated in Australia, The Funky Phantom was noted for its unique sound effects, which were unlike those in any other Hanna-Barbera cartoon. The show's run of original episodes only lasted one season, with repeats being substituted for the second season. After being canceled in 1973, the show's episodes were incorporated into The Godzilla/Dynomutt Hour with the Funky Phantom, proving once and for all that if you like Revolutionary War-era ghosts, you'll love them even more if they're joined by a giant fire-breathing dinosaur and a robotic crimefighting dog.

This last series only ran two months, after which the Phantom and Boo presumably fled to the veritable sanctity of their grandfather clock, embittered by the phoniness of show business.
Traditional, Hand-drawn Animation.

Do you have anything to add to this page? Have we made any mistakes... or do you have any additional information about Haunted In Inn? If so, we would love to hear from you. Please send us a quick note with your additions or corrections to this page, and we will make the corrections as soon as possible!

Do you love Haunted In Inn, or do you think it is the worst cartoon ever? Let us know what you think! Surely you have an opinion... so share what you think. Take a minute and post your own comments about this cartoon here. 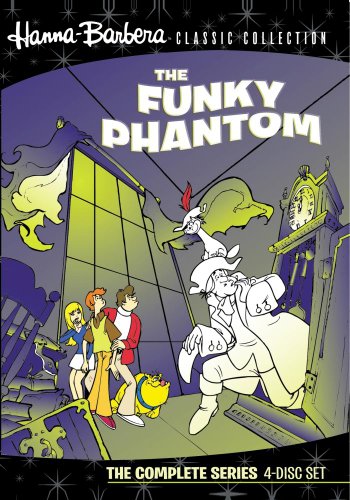