Post your Comments or Review
This page has been viewed 1939 times this month, and 9337 times total.
See the Full Cast & Crew...

The story follows two hapless scoundrels and lifelong pals, Tulio and Miguel, as the bumble along from obscurity and poverty in their native Spain to fame and fortune in the New World's fabled City of Gold, El Dorado. But just when they think they've finally...  (more)

Sorry, we do not have a video of The Road To El Dorado. If you have one, or know of one on Youtube, Vimeo or any other site, Let Us Know

Do you have anything to add to this page? Have we made any mistakes... or do you have any additional information about The Road To El Dorado? If so, we would love to hear from you. Please send us a quick note with your additions or corrections to this page, and we will make the corrections as soon as possible!

Below are comments about this cartoon submitted by people who have seen this show. Take a look and see what others have said about The Road To El Dorado. We want to know what you think, too!! Feel free to share your own opinion- we do want to hear from you! You can add your own comments here.

Comments By: Anonymous Cartoon Lover
I really enjoyed this movie I like the characters and the horse is great. Overall really good movie with a lot of laughs and is great for the 8 to 12 year olds, small children will like it too as it is a cartoon, and adults will like it as there is some humor...  (read more)
1 of 14 people found this comment useful

Comments By: toonwizz
I thought this movie had a few good moments , and the two title characters have a nice chemistry. The only problem is the storyline didn't really offer anything new ,...  (read more)
0 of 16 people found this comment useful 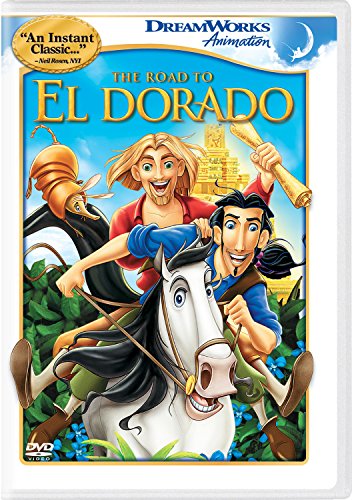