Post your Comments or Review
This page has been viewed 1961 times this month, and 11897 times total.
See the Full Cast & Crew...

The chief of the tribe is killed by a bear. His eldest son becomes chief in his place. The new chief's younger brother argues that his brother's first course of action should be to hunt down and kill...  (more)

You can watch this cartoon today on your computer. Just click below to start viewing "Brother Bear" online now.

Do you have anything to add to this page? Have we made any mistakes... or do you have any additional information about Brother Bear? If so, we would love to hear from you. Please send us a quick note with your additions or corrections to this page, and we will make the corrections as soon as possible!

Below are comments about this cartoon submitted by people who have seen this show. Take a look and see what others have said about Brother Bear. We want to know what you think, too!! Feel free to share your own opinion- we do want to hear from you! You can add your own comments here.

Comments By: georgia
'Brother Bear'is a very touching movie. It's all about brotherhood and the need for giving into a relationship.Kenai is given the totem of the 'bear of love' and he is not satisfied with it because he thinks that there are better things...  (read more)
6 of 57 people found this comment useful

Comments By: UncleJeffy
Pure pap. Technically striking, but so what? Only reason I bought the DVD is because Dave Thomas and Rick Moranis do the running commentary in character, and even that was below par for these comics talent. For all who adore this movie and disagree with...  (read more)
0 of 67 people found this comment useful

Comments By: StevenBailey
In the Disney-bear-movie sweepstakes, at least "Brother Bear" is miles ahead of 2002's fiasco "The Country Bears." Still, it's a pity Hanna-Barbera didn't make this movie. After a few dozen pronouncements about the wise spirit...  (read more)
2 of 70 people found this comment useful

Comments By: alecpele
This is a good production by Disney, which includes all the features that typical Disney productions do. The characters are all superb and the animation is great, as expected. The music is -once again- delightful. Phill Collins seems to be doing a great job...  (read more)
20 of 67 people found this comment useful

Comments By: damfine
Very well done. The story flows well. Good characterization. The McKenzie Brothers moose are hilarious. One of Disney's best for sure.
8 of 41 people found this comment useful 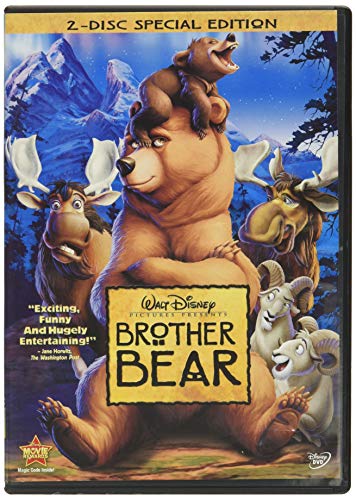